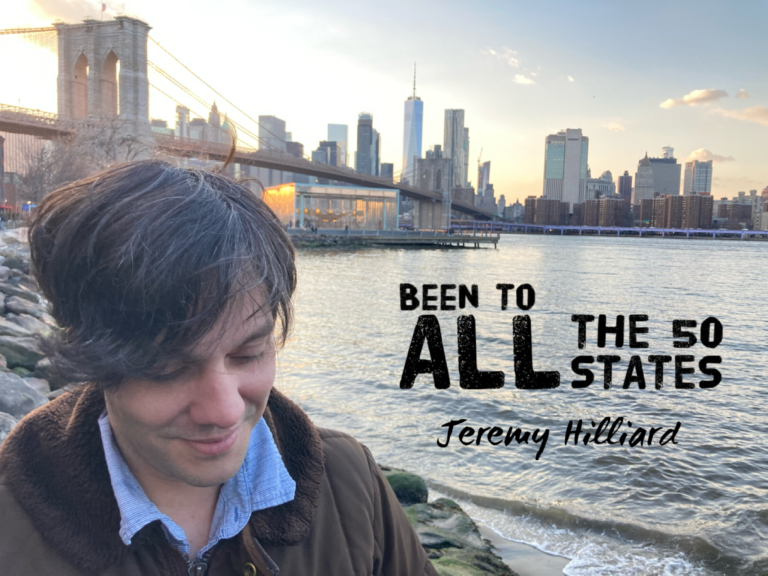 When the pandemic hit a few years ago and we all retreated into our homes, music went from being out in the venues to streaming from living rooms and home studios. I won’t lie, I kind of enjoyed it. Not only did I get to watch shows in my comfiest of attire all the time, I got to peer into people’s homes and hear music that was sometimes coming right out of their head. It was a unique time for music and while it was not financially ideal, it was this weird quilt of creativity and kinship that was blanketing people who lived and breathed the music from their souls. No longer was it beyond arm’s length for regular fans. It was in our homes and at times felt like it was speaking just to us. I know it was hard, but from the hardship came this thing that I don’t think I will forget.

One of my favorite living room performers from that strange and scary time was Peak’s Jeremy Hilliard. We would often be treated to acoustic covers and originals with vocal accompaniment and dance flair from his wife Beth and occasional hooked cat tail running across the screen. It was interactive and fun and about as social as we were really able to be at that time. The last show we went to in person before the world shut down was Peak so to us, it was fitting that we spent that down time with Jeremy. Since then, he has released quite a few of his solo work and I have had the pleasure of featuring a bit of it here on the blog. I am beyond delighted to recommend you all head on over to Soundcloud or YouTube and check out his latest collection titled Been To All the 50 States.

The record is wonderful singer-songwriter stuff full of great songs. The tracks as a whole carry a wonderful Americana feel with strong folk influence and peppered with flavors from all over the map. The song “Property Lines” for example has a vibe of throwback alt-rock. Something about the guitar tone and the way Jeremy and Beth use their voices to play off one another in the chorus reminds me of alternative radio in the 90’s. And that is a good thing. It’s such a cool track. I also dig on “I Ain’t Afraid of a Little Dyin’”and it’s really steady-stepping folk vibe. This is the kind of song you could envision walking down a backroad, singing and stepping in time with. I am someone who is often caught wearing a shirt emblazoned with the words LISTEN TO WOODY GUTHRIE so throwing something like this song at me is like throwing a steak at a hungry lion. I love this song and the way that the sunny but determined mood just permeates everything as it moves along. I have listened to this song so many times that I pretty much know the words and I can’t stop singing along. It is kind of resonating with me in a weird way that I have not quite tacked down yet, but music is like that. I have said it before and I will say it again. Sometimes you hear a song when you most need to and it just GETS you. It’s been days. I can’t stop listening to this.

Kick on over to the title track on this collection, “Been To All the 50 States” and feel the folk vibes just seep into your soul. The song is so simple in its construction but the guitar work is so beautiful. Combined with the lyrics and the way it is sung, it creates the perfect little summer backyard soundtrack song. It just has that feel. This ambiance created with simple components but complex meanings is everything I love about a song. I have to give some big props to Jeremy’s wife Beth on her vocal backups on this record because she is the perfect vocal contrast to Jeremy’s voice. On this track in particular, it changes the whole feel and fills it out. So amazing! “The Great White Whale” is another direction for this collection of songs. It’s carrying that Americana feel and injecting it with an almost John Denver sort of thing with its energy and tempo. Not sure if that was the intention, but I was raised on my mom’s devout love for Mr. Denver and it’s in my head for life. This track just rang that bell high and proud. I absolutely love it.

All in all, Been To All the 50 States is a wonderful collection of songs and feels and I am absolutely stuck on it right now. It’s summer now and where we live, everything feels like a journey to the festival fields on a nice day. This record carries that ambiance with it from track to track. It’s not to say that this is a one trick pony kind of album because it isn’t. The songs do not sound alike any more than the voices that carry them. They are all creatively written in different tones and feels that are absolutely pulled from deep within the soul to tell a story. The best thing about music to me is the way that it can tell you a story just with how it feels but when you add in great vocals and lyrics, that story just gets more and more vivid every time you listen. This is really an entire album of that concept. I can’t recommend enough that you give this collection a spin.

Honestly, this whole record would be an outstanding summer porch concert series somewhere up in our rural county and I am wondering if I can drag Jeremy and Beth out for that some day…

You can check out the album at SoundCloud here: https://soundcloud.com/jeremy-hilliard-1/sets/been-to-all-the-50-states?utm_source=clipboard&utm_medium=text&utm_campaign=social_sharing

Or head on over to YouTube and give it a listen here: https://www.youtube.com/watch?v=69285VQQWFk

In either case, devour this incredible record. Feel and ENJOY!

You can also catch Jeremy’s band PEAK out on the road this summer and you absolutely should! They are probably the most fun live band out there in the scene right now. Don’t take my word for it though…