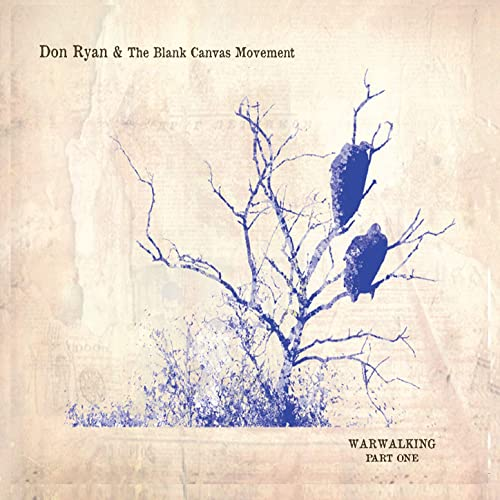 Well over a decade ago, I was doing a radio show at the Pocono Internet Broadcasting Company in Stroudsburg, PA. Driving across the Delaware once a week was not enough for me to devour this music I loved. More than that, I wanted to connect the music to people who might not have heard it yet, so I decided to start a blog as a sidecar to my show. When our studios closed and I moved to podcasting from home, the blog became even more of a focus. One of the first artists I ever reviewed and wrote about was New Jersey’s own Don Ryan. I loved his indie folk style and the way his music dragged you into his thoughts and through the brush with him. It’s still one of my most favorite pieces that I ever wrote across all the platforms I had the privilege of writing for.

Imagine my enthusiasm when he announced a new album! Unfortunately, COVID happened, my life flew into craziness, and here I am two years late on telling you all about this amazing collection of songs by one of my favorite home grown musicians. I’m sorry I was tardy, folks. Let me tell you about Don Ryan.

Don Ryan is gravelly, pulverant New Jersey set to music. He writes music that feels like the underbelly. The romanticly sabulous side of us all. I think when some people who don’t live here think of us, they think of the “us” that tv and movies portray. They think of the shore or some sort of Italian-American culture. They think of Bon Jovi or Bruce Springsteen. They see smoke stacks and boardwalks. The truth is though that New Jersey music is a deep pool written by mountains, lakes, abrasive reality and a lot of coffee. It’s traffic and wildlife. It’s the outskirts of the city and the backyard of suburbia. It’s rural America. It’s produce. It’s a drive on Clinton Road, trying desperately to experience something that may or may not be there. It’s stone homes that stood since Washington marched through. It’s marshes and ports. It’s late night diners and early morning convenience stores. We have a culture that people have tried for a long time to define and never made it beyond taylor ham/pork roll arguments and The Sopranos. That just doesn’t cut it.

Since I first heard his early release of Tangle Town so many, many years ago, I feel like listening to Don Ryan’s music is a visceral experience in what New Jersey is, strained through your soul and wrung out of your jeans at the end of the long night. It’s like night time drives down sparsely lit roads when the weather is warm enough for the windows down. When you know if you stop the car and get out, you might get scared but as long as you stay in the car you can enjoy how that sense of fear delicious. His songs are thoughtful and almost spiritual in their delivery. His vocals go between throaty and deep and lightly laid down. It’s music I never get bored of. It’s music you close your eyes and enjoy while your mind wanders.

And this new music is so much of that.

These new songs comprise a gorgeous two part record called Warwalking, Pt. 1 and Warwalking Pt. 2. They feel like a hardback collection of memories and musings you found in an abandoned hotel. It’s dripping with experiences that permeate everything you are. Relatable and soothing in their trip between melancholy and exasperation. The music is an indie-folk trip into chaos. Take for example the track King of the Clowns on Pt 2. It twists and turns as it pulls you along behind, as if dragged by hand through a carnival funhouse with lights flashing and music blaring. You are so entranced, out of control and hyper-stimulated while having no idea what is around the next corner – but you are guided, never alone, your hand held. It’s exquisite and engrossing and everything I love about this songwriting.

Murder Industry, my favorite track on either record, carried a similar vibe but with a stomping and melodic groove that seems to carry you around the grounds.  On Pt 1., the song Color In, Color Out is equal parts haunting and entrancing but at the same time all consuming in its beauty. The vibe rises and moves toward climax, building anticipation with it’s tone before reaching that peak and dropping off. Quite like life. Lady Codone on Pt. 2 is another gritty and captivating melodic journey. It’s got an almost ballroom dance affection while it spins, rises and falls. The groove holds you in that way and makes you want to move with it in dance.

Don informed me there us an upcoming Warwalking Pt. 3 and I honestly can’t wait. I would love to see this project performed live and as soon as we can chase this COVID cloud away from us long enough, I hope to get that opportunity. In the meantime, I strongly suggest you get over to Don’s website at https://www.donryanmusic.com/ and keep updated. Check out his two beautiful records, Warwalking Pt 1 and Warwalking Pt 2 and experience this marvelous audible journey.